One of inspiring movies for an Entrepreneur or Intrapreneur to watch is Moneyball. It is about Oakland Athletics baseball team’s general manager Billy Beane.

As the story goes, Billy, who faced with the franchise’s limited budget for players, decides to build a team of undervalued talent by taking a sabermetric approach to scouting and analyzing players.

Early in the season, the Athletics are way behind, leading critics to dismiss his new method as a failure. Two months later, the team starts an amazing winning streak and ends the season with a record-breaking 20 consecutive wins.

I have always been fascinated by such counter-intuitive ideas or seemingly innocuous things that have a disproportionate impact on us.

So much so that this has shaped our design thinking philosophy at MINGL.

I will be posting these MONIBALL  philosophies mostly as our internal guide, but also to  document our journey and learning in case other product designers may find it useful.

I wanted to start with a remarkable experience that started it all – when a period[.] almost cost my job

In 2005, I was leading a development team in an Investor Services department of a large bank. Long story short, my team had written a bunch of programs that serviced Microsoft shareholders.

A major problem occurred, when a glitch on a corporate action caused all of Bill Gates shares to show up on someone else’s email and Bill got a random shareholder count to vote on.

Needless to say, IT hit the fan pretty fast.

For some context, this was 2005 when Bill Gates was the CEO and largest shareholder of Microsoft. 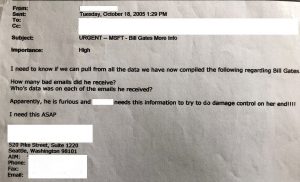 The last thing you wanted to see was Bill Gates and furious in the same sentence – especially when he was totally justified to be!

The next few days were surreal. All I remember was the entire department working on this. From sifting through thousands of lines of code to checking if CNBC, WSJ had any breaking news on this – There was an implicit understanding that few heads would roll if this made it there, and as a lead I was on top of the list.

It was mixed emotions when we finally found what the problem was – one period[.] just happened to be on a wrong line.

The issue was that in programming language, Cobol, there were 2 ways to end the loop –  END-IF or period[.] and problem was the loop ended in a wrong place.

What made this experience truly remarkable and humbling was the disproportionate cause[.]  and effect[Bill Gates]

I think, in the end, every saw the irony of this and as far as I know no heads rolled because of this.

In conclusion, the lasting lesson I learned from this experience was, to never underestimate period.

MONIBALL #2 – a stitch in time
Scroll to top